You’re wondering: Where or what is Plan-de-Cuques?

Well, it’s a town, or rather a suburb – actually a commune north of Marseille – and it has a few secrets.

Plan-de-Cuques is not very old in comparison to other French villages, although abundant archeological evidence indicates there has been human habitation in the area since prehistoric times. Up to the 1940s Plan-de-Cuques was just a hilly agricultural area surrounded by rocky mountain ranges. The landscape was dotted here and there by small farmers’ homes and little huts or cabins called cabanons where city folk from Marseille would escape to experience some quiet country life. Gradually, the farm lands gave way to the development of a leafy residential area of typical Provençe-style homes with clay-tiled roofs.  The little cabanons slowly disappeared and with it the agricultural activity – except for one.

I know about Plan-de-Cuques because my Marseille cousin, Claire, and her family bought a corner property there in the 1980s and built a house with a marvelous view of Allauch. It has been the center of all family gatherings ever since. Whenever I am there and sink my teeth into the delicious vegetables she places on the table, the same question bursts out of me: “Where do you get these?” The answer is always the same: “Deux vielles dames – les paysannes de Plan-de-Cuques – Janine et Marie” (Janine and Marie, two elderly village farmer ladies). On my last visit she asked, “Haven’t I ever taken you to meet them?” Well, no. So she took me on the next visit. As we drove along the winding roads of Plan-de-Cuques, Claire explained a few things.

Janine (in her 80s) and Marie (in her 90s) are devoted friends and fierce competitors at the same time. “Each of them interrogate me about what I bought from the other and how much I paid. I have to be very diplomatic” Claire explained. Their personalities are also polar opposites I learned. Marie is douce (mild) while Janine is more piquante (spicy).

Of course I didn’t expect the folkloric costume, but I imagined meeting a lady with weathered skin, gray hair tied in a bun, a long sweater, long skirt, and maybe a kerchief and a cane.

After exchanging warm greetings, Janine asks Claire, “I suppose you’ve come for my beautiful tomatoes?” “How did you know?” Claire replied. “Well I don’t have any more!” she shot back briskly. Claire accepted and changed the subject by suggesting that Janine show me her domaine, which she proudly and happily did.

After touring Janine’s small domaine we return to her “store” which is/was a garage. In the meantime a steady stream of people have been coming and going picking up orders they had called in. Claire finally asks casually, “What do you have in the back room?” Janine says nothing and disappears behind a curtain. She returns with a box of luscious-looking tomatoes. “I don’t have anything else!” she snaps. More small talk follows before Claire sneaks in another question: “What else do you have back there?” Again, Janine silently disappears to the mystery room returning this time with cucumbers. More customers come and go, always with plenty of chatting. In-between, Claire keeps coaxing out Janine’s harvest. It was like a kind of choreography.

After completing our purchases we came out to admire Janine’s picturesque patio. Claire asked Janine if she would mind if I wrote something up about her and her beautiful harvest. She swelled with pride. Ah! She would have something to boast about to Marie! Could I post a picture of her? “Oh, my hair!” A panicked Janine ran into the house to fix herself up. While she was gone Claire provided more background. “Janine is very coquette. She dresses up every week to go into town for her hair, shopping and seeing old friends. She was widowed many years ago and has two grown sons.” She went on, “One other thing. It may take a while for us to leave. Janine loves to gab and leans against the car while talking away.”

Janine reappeared and I captured the portrait of a beaming lady. 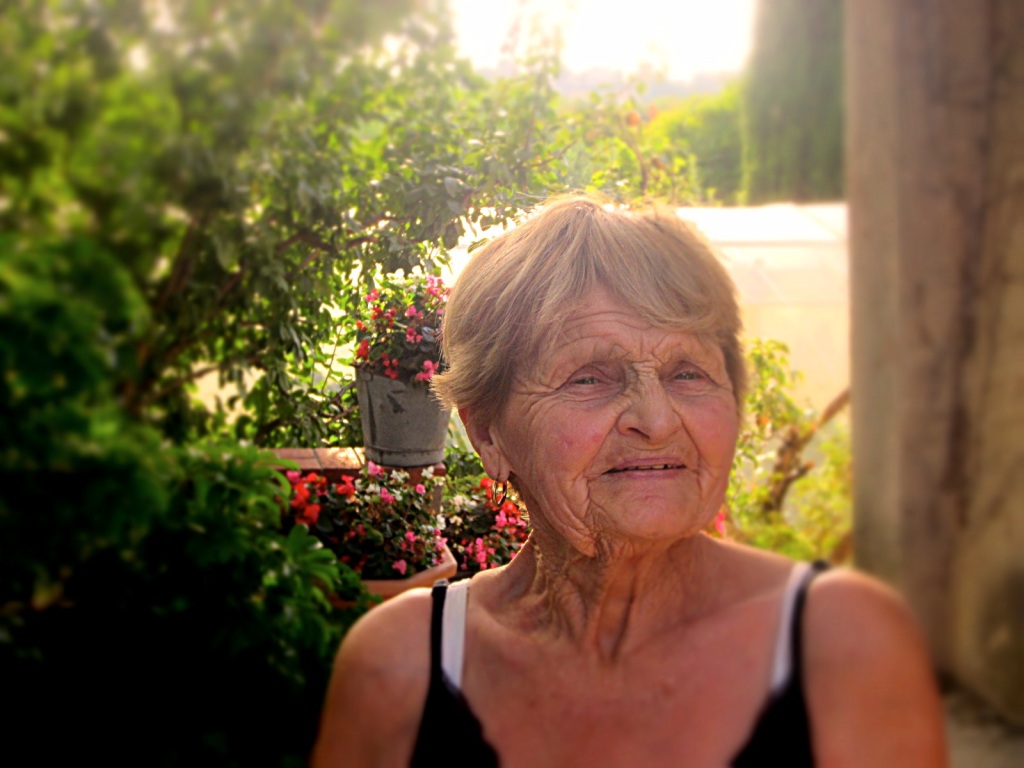 The conversation never slowed as we put our bounty in the trunk of the car and got in to drive away. But, as predicted, we were stuck. Janine had draped herself over the hood of the car, reclining as if on a chaise lounge, her head propped up by her elbow still chatting about this and that and everything. We broke away gently when Claire finally said she was sorry to have to speed off but she had to get dinner ready for the family.

Janine never got the chance to boast to her old friend and rival about being written up in an American “journal.” Sadly, Marie passed away last summer.  Now, Janine is the last paysanne of Plan-de-Cuques.

4 thoughts on “Marseille Stories: Janine – The last Paysanne of Plan-de-Cuques”

This site uses Akismet to reduce spam. Learn how your comment data is processed.