Winter is a time to curl up into reflection mode – to read, to think, to dream, and to plan. On the other hand, it could get a little too fuzzy-warm and inward orientated. A vitalizing element is needed, if only in your mind.

On that tone I invite you on a short, winter armchair journey to a country offering abundant opportunities for soulful contemplation in unique places – plus much more.

Armenia – sometimes called “The Forgotten Holy Land” – is a rugged and fascinating country. In spite of all the riches it has to offer, it’s not on the big touristic radar screen. Maybe that is a good thing.

Armenia does have a burgeoning tourism industry efficiently handling a very busy summer tourist season. But as far as I am concerned, the best time to travel (anywhere) is off-season – when it feels like the places are all yours. That’s how I felt when I spent a spring in Armenia. I’ll plan my next visit during the autumn or winter. And by the way, for winter sports lovers, a place called Tzaghgadzor (Valley of Flowers) has a superb ski resort with the latest lift technology and luxury hotels.

So why not an  Armenian winter adventure?  Freelance photographer Raffi Youredjian, of London, did just that during a “mild” winter in January 2015 and captured wonderful images of some of the more well-known sites, and some lesser ones too. I would like to share a few of these images with you. They have inspired me to want to make a winter trip to Armenia.  So put on your imaginary snow boots and let’s go!

To see and experience Armenia you need to go out of Erevan, the capitol. The first places most people visit, due to their proximity to Erevan, are the Temple of Garni and Geghard Monastery.

The Temple of Garni is a Greco-Roman pagan temple and fortress built in the 1st century BC at the edge of a three-sided gorge and dedicated to the Armenian god Mihr (Mitra). At that time Armenia was a client state of Rome and Rome’s big rival empire was Persia. Naturally, Armenia – a country of greater importance and physical area at the time – was always tangled up in a tug-of-war between the two competing empires. From the 3rd c. AD Garni became a luxurious summer residence of Armenian kings.

The temple has had a rough and tumble life. Between the 1st century AD and the 17th century it was destroyed either by earthquakes or by Roman, Arab,Turk, Mongol, Persian and other invaders, yet always pieced together again by various Armenian monarchs. But on June 4, 1679, a violent earthquake toppled Garni where it remained in ruins until the 20th century. It was pieced together again, between 1970-1978, from the original parts.

On the grounds of the temple is one of the best-preserved Roman baths I have ever seen!

The monastery of Geghard is an incredible and mystical place. It was built as a Christian monastery, established in the early 4th century by Gregory the Illuminator, founder of the Armenian Apostolic Church. It is dug out of a rock mountain. Clergymen lived in small cells hewn out of the rocks. Both the rock exterior and interior are richly carved with crosses. The chapel was built between the 12th and 13th centuries. Geghard is a UNESCO World Heritage Site.

Karhunj (Zorats Kar) could be a kind of Stonhenge. This large, prehistoric site is a truly mysterious place. Scientists and archeologists around the world from many disciplines are still trying to figure out the meaning and purpose of these strange and complex rock formations with carved-out holes. On windy days the Speaking Stones whistle when the wind blows through. It must be eery.

These are the ruins of a formerly tall, round and majestic 7th century cathedral discovered and excavated between 1901-1907. They are built on the remnants of what are believed to be structures of the Uruartian Kingdom of Rusa II, once a dominant power and forerunner of the Armenians. Times were rough with so many tribes competing to get bigger and bigger pieces of the pie. Some survived, some didn’t. 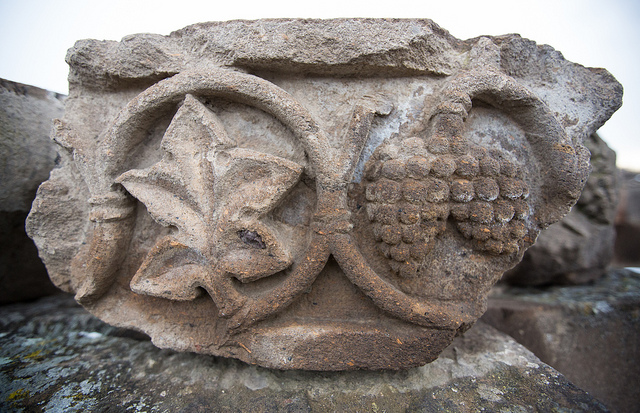 Figs were more than likely introduced into Armenia by the Romans, but grapes are indigenous.  This fruit is so deeply ingrained in Armenian culture that the holy liturgy of the Armenian Church every August has a special ceremony called the Blessing of the Grapes, which probably dates back to pagan times. The earliest signs of grape cultivation are found in this region. As you will see later, archeologists have made some very exciting discoveries recently. 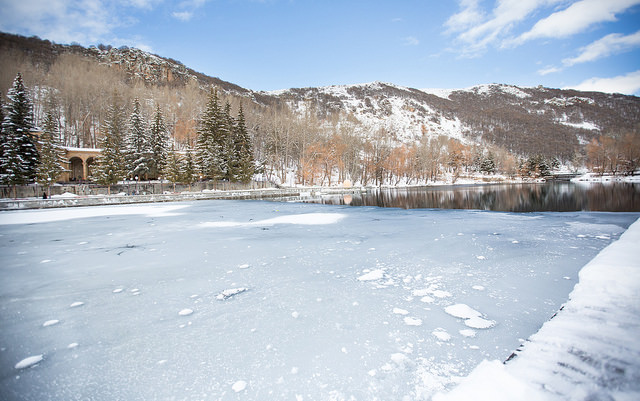 Jermuk is a heavily forested area with alpine meadows and hot mineral springs much appreciated since the middle ages for its therapeutic qualities. The waters are bottled and exported worldwide. It still has a Soviet style sanatorium  but a health and tourism services sector is developing. Jermuk is set to become a major international chess center.

Jermuk is located in one of the most scenic and historically interesting provinces of Armenia. The sparsely populated area was right on the Silk Road. How welcome and refreshing for weary caravan travelers. 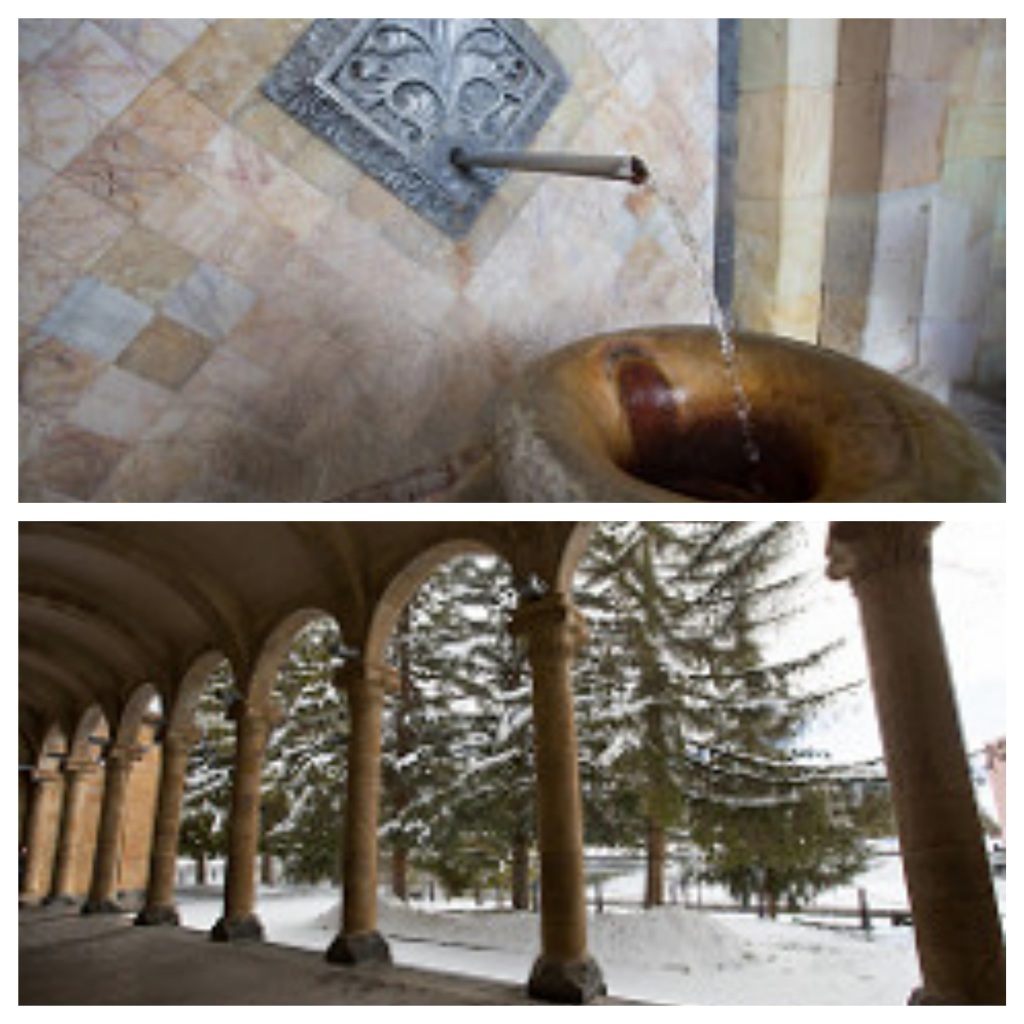 Hikers, rock climbers, bikers, horseback riders, and campers will stumble upon precious ‘jewels’ throughout the country.’ The landscape is brimming with ancient monasteries, forts, intriguing monuments and caves – all set in unspoiled surroundings.  Between the 15th and 17th centuries it became a battleground between Turkic and Iranian tribes. Perhaps that is where this region gets its name: Vayots Zor (Gorge of Woes). Just a short distance away you’ll see this:

And nearby is Gndevank, a monastery built in 936 by Princess Sephia of Syunik Province as a “jewel” for the Gorge of Woes. 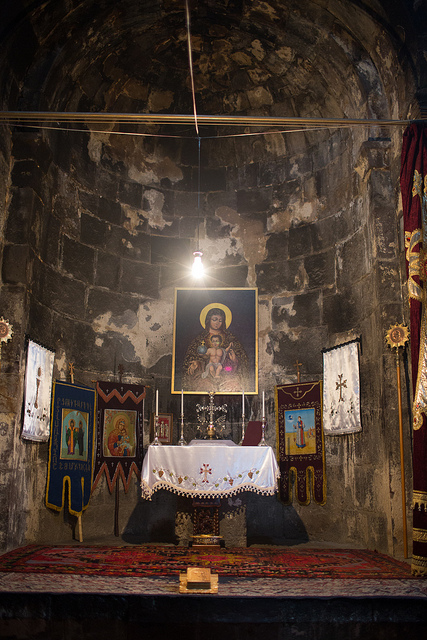 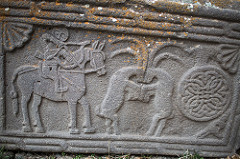 At 6,200ft/1,900m Lake Sevan is one of the largest and highest fresh water lakes in Eurasia. It’s always very cold, even in summer. Some locals love jumping in the bracing water. Most people just enjoy a refreshing escape from the summer heat. It’s a popular stop for tourists. The 9th c. monastery was founded by Princess Mariam, the daughter of King Ashot I, during the period of struggles against Arab rule.

All Roads Lead to Dvin –  Looking at these ruins it’s hard to imagine that Dvin was once the wealthiest and largest city in Armenia with a population of over 100,000. It is, however, of high interest to archeologists. Excavations have been ongoing since 1937 producing a wealth of material from the 5th to 13th centuries.

Dvin (meaning “hill” in middle Persian) was built in 335 by King Khosrof II (of an Armenian branch of the Persian kingdom) on the site of an ancient settlement and fortress of the 3rd millennium BC.  Dvin became an important ecclesiastical seat and served as a major transport junction, as well as production and export center.

The walled city, where Armenians, Jews, Kurds, Arabs and others lived together in reasonable harmony, had several city gates, each named for the roads they served.

Most of the population consisted of artisans of various crafts including silk production, tanning, iron, stone, woodcutting, weaving, pottery, goldsmiths, wine-making, fishing and trade. The artisans’ secrets were tightly guarded, passing only to family members. This must have been tricky, considering the prevalence of fierce competition and hostile takeovers.

Eventually, the prosperous city was captured and pillaged by invading Arabs. . It is recorded that on Jan. 6, 642, they stormed and took the city slaughtering 12,000 and carrying 35,000 people into slavery. For some 200 years the city was under Arab oppression and a battleground between Byzantine and Arab forces. Then, in 893 an earthquake destroyed the town and its 70,000 inhabitants.

I was afraid I might succumb to the syndrome of what some call monastery fatigue, but that never happened. I felt as if I was in a jewel box looking at precious jewels: what will the next one look and feel like? Yes, feel because each one has a different vibration. In any case, it doesn’t matter what your faith is, or if you have any faith at all; visiting these places is like a soothing balm on your soul. Perhaps it’s due to their settings and utter simplicity. One thing is sure: the walls speak. 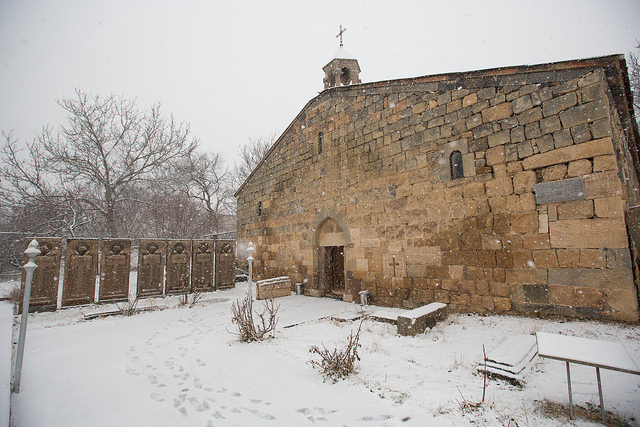 Gladzor was founded in the middle ages as a calligraphy center and university. Students followed a rigorous study program in subjects such as theology, mythology, philosophy, astronomy, geometry, logic, rhetoric and more. They practiced oral debate and students defended their graduate thesis.  Hundreds of manuscripts were created here. This manuscript art continued well into the 19th century. 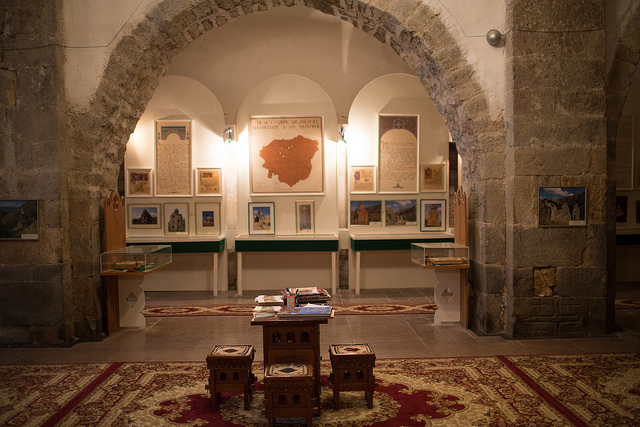 Khor Virap Monastery – I couldn’t resist this dramatic picture of snow-covered Mt. Ararat in the background and vineyards in the foreground surrounding the iconic site of Khor Virap (Deep Pit) which for Armenians is a place of pilgrimage and a must-see for visitors.

Areni Cave – Wine-making in the Areni Valley has long been documented through the ages by historians who write that Armenians made and exported quality wines. History, however, wasn’t very considerate and repeated invasions caused disruptions until finally their age-old craft died out completely during the Soviet era. Thankfully, during the past few years a fascinating wine-making renaissance is in progress.

And now for the most exciting part. Ten years ago archeologists discovered a cave in the Valley where they found a perfectly preserved,  large-scale wine production facility dating from 6,100 years. It is the oldest so far discovered. Also unearthed in the cave was the oldest leather shoe ever found, in perfect condition, along with many other artifacts. 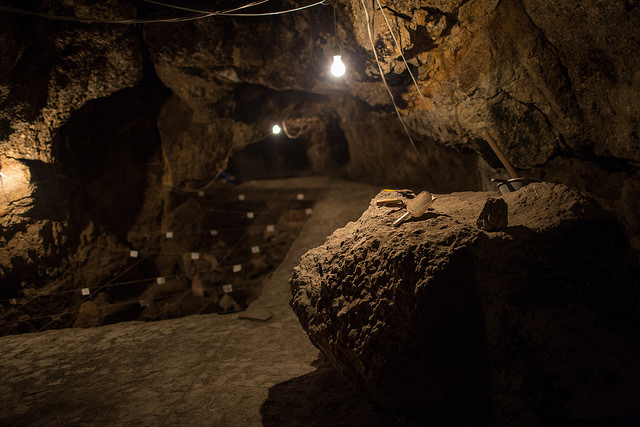 The story doesn’t end here. In fact, it gets even more interesting. But I’ll stop for today.

I hope you enjoyed this little ‘diversion’ and if so, why not share it. (You can take your snow boots off now.)

9 thoughts on “Armenia in Winter”

This site uses Akismet to reduce spam. Learn how your comment data is processed.